Should I write this, would someone recognising the symptoms and getting a diagnosis a week or two earlier be a good or bad thing, I don't know?  The reality probably is that by the time someone is googling Creutzfeldt-Jakob Disease their life has just turned to shit, before that you google depression and stress and it doesn't quite seem right but hey, we all know anyone can suffer from mental health issues.  So if this blog raises a red flag to you, make Wills, say what you want to say to your loved ones and then hope, hope with everything you've got that this isn't going to be your story.

So our story started in November, before that Mark had problems sleeping but life was good, he'd lost weight but he'd worked hard all summer and he was a wee bit down but the weather was awful, we were all moping about.  Then the niggles started, Marks hands were shaking, he forgot how to log into his internet banking, he occasionally missed a horse out when he was feeding and then terrifyingly one night Mark, who was a wonderful cook, couldn't work out how to use the oven.   It wasn't constant, not at all, as normal we laughed every day and life went on.

Mark was never ill and it took us a little while to get him registered with a Doctor and when he did get an appointment they thought he was severely depressed.  We talked, no one's life is perfect but I couldn't see why he was struggling so much, I asked did he have debt I didn't know about, another woman perhaps, yip horrendous and in hindsight totally unnecessary conversations.  The odd, odd thing about that appointment was Mark was upset he'd offended an old man in the waiting room - there was no old man in the waiting room.  So at 37yo and with no history of mental health problems and no drug or alcohol dependancy he was having paranoid delusions.

That night in bed Mark told me he was dying, he was distraught.  The psychiatrist who saw him the next day had him admitted to Dumfries hospital immediately and despite it being just days before Christmas he had a CAT Scan, Lumber Puncture and many blood tests.  They were all negative and so we were back to the mental health diagnosis, everyone was so very positive, they could fix this, nothing to worry about.  Honestly, I was horrified, so was Marks mum, how naive were we?

Mark had an MRI the Tuesday after Christmas and no one expected an issue, this was just dotting the I's and crossing the T's.  The consultant rang that night, Mark had "significant abnormalities" and he gave four options, the first was CJD but he was in the wrong age group and it was so very very rare.  The other options were treatable, they gave us hope.  Yes, they gave us hope when there was none because they knew then, Marks MRI was a brilliant example of CJD.

The following Monday the team came down from Edinburgh and formally diagnosed Mark, they gave him 3-5 months.  We pushed to get Mark into palliative care and when he got a room there he looked out the window at the bulbs coming through and said he wouldn't live long enough to see them flower.  He was right, he died just 16 days after diagnosis. 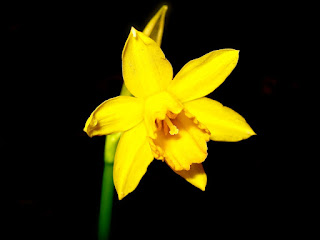 Laura, you continue to be an inspiration even in the darkest of times. Mark would be so very, very proud of you. Sending huge hugs from France xx

Laura, my heart is devastated for you. I am amazed at your bravery, as you carry on without Mark. You are a lovely strong woman. Keep on Keepin' on. Hugs from Wisconsin.

What a brave and difficult post. Yes of course you should write about it. No it won't change the unimaginably horrific experience or tragic outcome for you or anyone in a similar situation. But more should be known about this devastating disease and writing can be cathartic.
Keep writing. xx

Laura, my heart is breaking for you. Your life has taken such a sudden and dramatic turn. Only the bravest and strongest of women would be able to cope. I believe that you are one of the few. First of all, you know that Mark was worried about you and that by getting through this you will have made him proud and happy. Your love was evident to anyone who could see your photos and I believe that the memories you made together will last a lifetime. I hope and pray that some day you will look back on these years as idyllic and some of the best of your life. My family and I send our deepest loving sympathy to you. Meg in Canada

Laura, I'm so so very sorry for you immense loss. It takes a brave person to share at this very raw time. My love to you xxxx

Laura, I can only imagine how you are feeling now after all this has happened. My Deepest sympathies are with you and your family. This is a translation which I think would be rather appropriate for mark. "You remember a garden by the flowers never the leaves that fall, remember his life by the smiles never the tears that fall". kate canonbie kkx