Looking for something else on Google and stumbled on an article on the East Park RDA page.

"On Thursday 26th May, a lovely sunny day, we held an open day to celebrate the opening of our new stable building, attached to the end of the indoor school at Little Brook Equestrian. The building was donated by Caroline Clarry, pictured above cutting the ribbon with our patron Dame Judi Dench. Mrs Clarry is a member of the President’s Club of RDA National and has asked us to name the building the Chamfron Building after the stud belonging to a great friend who recently died.

Various donors had contributed to the cost of putting the building up, and were invited to the opening, along with the Mayor and Mayoress of East Grinstead. Dame Judi brought her daughter Finty Williams with her and a number of our other supporters were also invited.

Some of our visually impaired riders from St Stephen’s School gave a demonstration lesson before presenting bouquets to Dame Judi and Mrs Clarry. After the official opening ceremony, a buffet lunch was served inside the new building, which was much admired by all."

I like the matching nails and shiny new scissors! 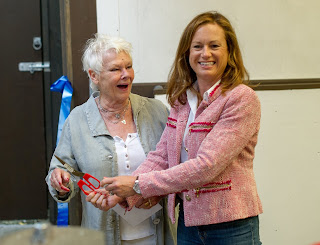