Well as muley has a huge fan club and larger group of friends than I do I thought it was about time she got her mug shot on the blog! Treacle (Show name "Mule of Kintyre"!!!) is a 14.3hh grulla ride and drive mule. She is a 5yo this year so we are just starting to get her going under saddle and out and about to small jumping competitions for the experience and she takes everything in her stride!

My mule makes me smile!!! 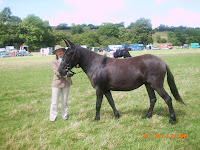 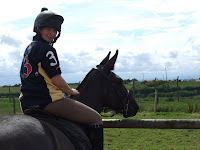 We have our fourth mare scanned in foal - so Sheza Perfect Zippo (Ruby) is due on the 5th of June 2008. I'm really looking forward to seeing what this cross produces as Ruby is by the stallion Perfect Execution and was imported from Texas as a 3yo.


Kofi's foal is doing very well and she absolutely dotes on him now. She was swabbed today and will be covered by Nico for 2008. 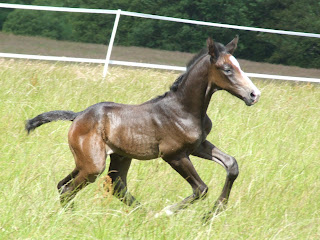 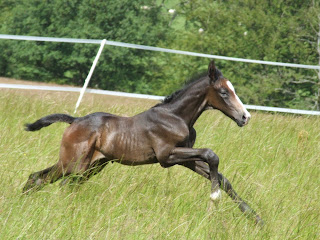 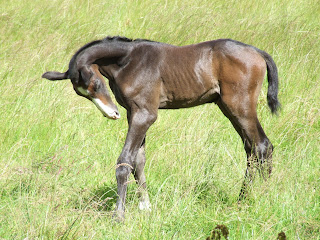 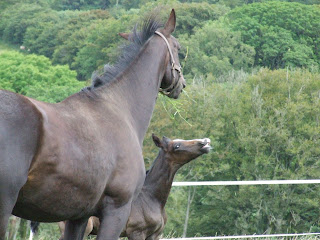 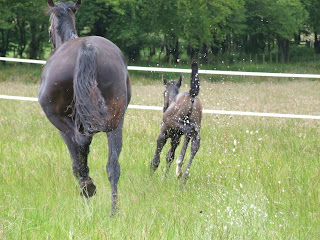 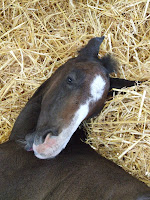 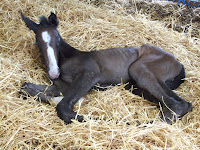 Born eleven days early on the 14th of July - a grey colt, bred to showjump. Out of Kofi (Elew ex NH mare by Oats) by Marco (Parco/Darco bloodlines).
Very pleased with this cracking big foal - at the moment Kofi is less enamoured with him and has a slightly horrified look about her but I'm sure she will settle down just fine in the next 48hrs!

Pleased as punch - we have scanned the first three mares today and are pleased to say they are all safely in foal now. We didn't plan on having any foals born before May here as the farm can be a (Little!!!) wet! So for 2008 we have -

Daisy had come back into season last week so we scanned her to see if there was any problem and she has been given the all clear by the vet. Will just have to keep trying!
Posted by Laura at 09:51 No comments:

Nico covered just three mares last year while he was at Verwood Meadow - but what a cracking bunch of foals they are!!
For Joanna at Verwood he produced a few spot filly named Lacey on the 4th of May. She is being retained at the stud. Lacey is out of FENJAY ROYAL SPIRIT (Dixie) who is by Tiptoe Royal Blue and out of Southeau Mynx (Quarter Horse).

His two outside mares owned by Gemma produced LOTS of colour!!
Firstly her snowflake mare by Cochice II produced a bay snowcap blanket colt. Both mother and son are for sale, please leave your email address in my comments section and I'll pass on the contact details. The mare, I'm told is a lovely mover and a great riding horse and hunter. 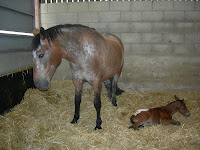 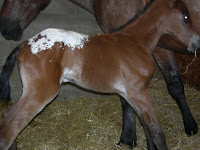 Her second foal is a black leopard colt out of a piebald mare. 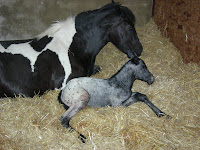 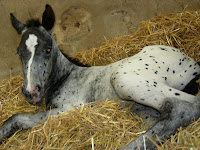 Well I know it's a long way into the future but all our foals can come back to be broken in by Mark at a very reduced tarrif.

Mark has previously been Assistant Trainer to Michael Chapman and Alan King and has ridden in Hunter Chases and Point to Points. 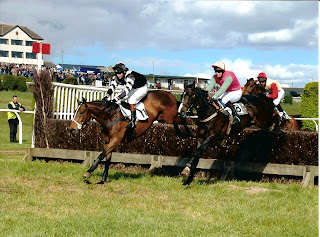 This photo is of Mark riding his father's "Just Ned" (black colours) leading the field at Hexham and is used with kind permission of Grace Berrisford.

Currently Mark is playing polo in the summer and hunting the young horses in the winter. 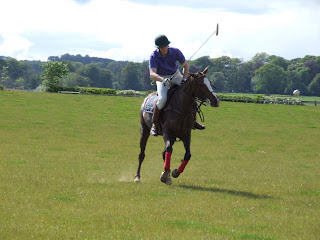 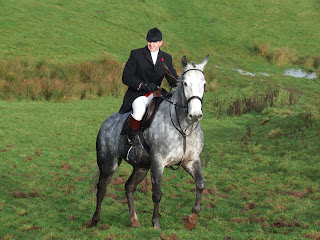 You wouldn't say it's been polo weather this summer though!!!! 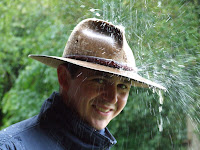 Mark was also awarded the (dubious) honour of "sexiest man in breeches" at this years end of season hunt supper.......

Well it's all very well having a stallion but then you need some broodmares!!!

Well firstly we have on breeding loan for this year "Kofi" she is in foal to John Dunlops young jumping stallion "Marco" and due on the 25th of July.

Yes a bit of a late foal (though with this years weather....!!!) but last year Kofi decided to join the "true love waits" camp and refused to come into season. A small chat in her ear about being "got fit and hunted hard" and voila she was in season and down to Dorrnock for a quick holiday!! Kofi is to be covered by Exbury Ghost before leaving us at weaning. She is a good big mare, dark brown by the piebald jumping stallion Elew out of a NH mare by Oats. 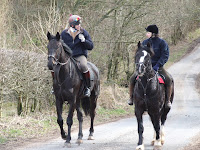 This picture shows her on a hunt ride as a gangly three year old - just backed!!

The next broodmare we have is "Shesa Perfect Zippo" an imported Quarter Horse mare from Texas. By the absolute star stallion "Perfect Execution" - http://www.perfectexecution.com/

Known at home as "Ruby" she is a beautiful bay five year old. She has a super temperment and has been ridden English and Western to date. I'm very excited to see what this little mare produces!! 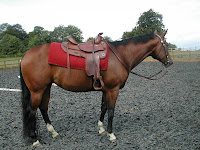 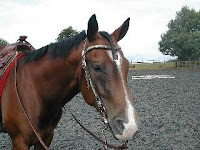 Then we have four Thoroughbred fillies that we have owned since they were weanlings. They are all super to handle, real characters.

Firstly "Bridget" - the biggest of the three year olds - a good 16.2. By Roi de Rome out of a five times winning mare. Only joining the broodmare band for a year as Mark has her earmarked for greater things!! 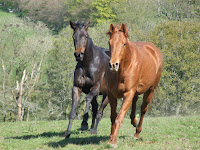 And last but not least we have "Tammy" a bay filly by Mind Games out of Timoko. This filly thinks she's "people" if her foals have half the personality she does they will make their new owners friends for life!! 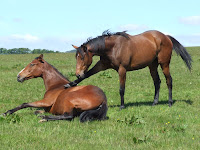 Well this is to be my attempt at a blog, mostly because I have so far proved to be totally incompetant at building a website.....!!!!

He is a lovely boy to have around, a super character and very easy to do. I'm looking forward to riding him once he's finished covering for the year.

So what colour is he...? Well his colour might not float your boat as it were - he is a true few spot appaloosa - he has a handful of chestnut spots if you look hard enough, but being this colour means that when he is crossed onto solid mares he produces SPOTS!!!! So far to date he has produced 100% colour on his foals - blankets, leopards, and snowflakes. I believe two foals were born solid but were stunning snowflakes long before their first birthday.

Here are some of his foals - with kind thanks to Joanna at Verwood Meadow. 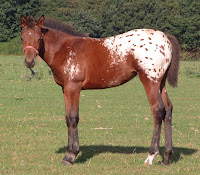 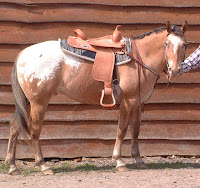 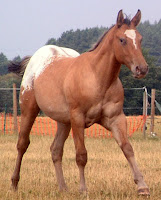 He is a mix of some of my favorite bloodlines - check out his pedigree here - www.allbreedpedigree.com/exbury+ghost

Please take the time to check out Joanna's website - www.thewesternshop.com/websites/verwoodmeadow/

(Especially if your looking for a nice western prospect, or imported american saddlery)

Free advertising for any spotty in Scotland!