Distinct lack of photos for the moment as the weather is grimmer than grim.  All the foals are in out the weather and Chaco has been weaned with no trouble.

Yesterday we had a bit of a day trip, heading up to Edinburgh for a Northern Lights flight which is our very kind Christmas present from Moira.  The plane heads up to about 61 degrees north then performs a race track holding pattern to allow both sides of the plane to get a good view of whatever is visible.  The night before it had flown out of Glasgow and seen a faint green glow but we were much luckier with bright green swirls, moving curtains, pink towers and pulsing lights.  Our pilot said it was the best showing he'd seen and the in flight experts rated it in their top three (having been on nearly three hundred flights).

Edinburgh Airports control tower was lit up red for Remembrance Day and we also swung past The Kelpies to see them lit up - they were red when we arrived, moving quickly to white and then were blue as we drove past them on the way home.  Now I did like The Kelpies when we visited them last year but I love them lit up in the dark, very very impressive.  We took one quick phone photo but we will definitely make a trip back up with the camera soon. 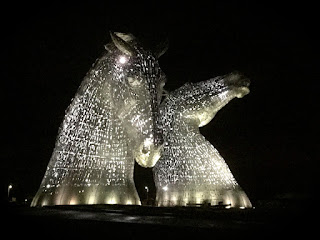