Chamfron Chipita had her first British Eventing outing at Kelsall Hill 90 on Friday where she was ridden by Wayne Garrick.  She had a 35 dressage and a clear show jumping round, a few babyish moments at the water meant that she was eliminated on the cross country but she jumped round nicely, finished confidently and all in all it sounds like a very positive first outing.  Hopefully pro photos to follow.

Chamfron Kukri (Gemma Hope) was at Dalkeith 90 today, a 32 dressage and a nice double clear for fifth and his first British Eventing rosette. 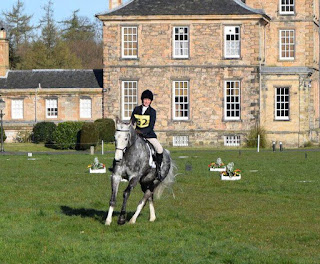