Well with a severe weather warning across Scotland it was a relief to wake up to the blue sky and no rain.  For this part of the country we have been surprisingly dry this last few weeks and unusually the trees have changed colour before going bald in the high winds!! 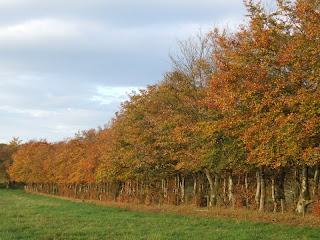 The majority of the old horses in the back field are now rugged for winter and that leads to the question - why so many old horses, as a commercial stud it makes absolutely no sense to keep horses that do not pay their way... or does it?  For us it works, we run young horses out in a mixed herd, they learn manners and grow up sane happy horses.  The oldies don't worry about quads, jet planes and escapee marauding cows so neither do the youngsters.  The herd lives in big fields, with slopes, natural shelter and running water, they stay naturally fit and sound.
The boss of the back field is Cheeko our unofficial teaser through the breeding season. 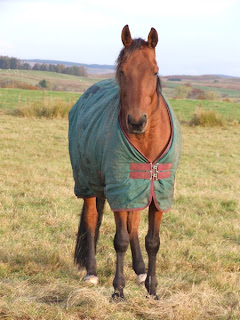 The mixed herd is not just mares and geldings, we have have long and short ears too! 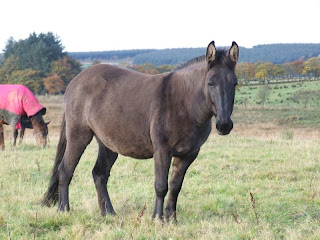 Quin, I steel myself for a one way trip to the kennels every year, with navicular, kissing spine and the most horrible flat feet known to man he can't go on forever but he adores the foals and youngsters.  I have no doubt if we ever needed a nanny to an orphan foal he would do the job.  He is with Stela (Chamfron Compostella) in this photo, she'll come in to the barn for the winter in the next month or so. 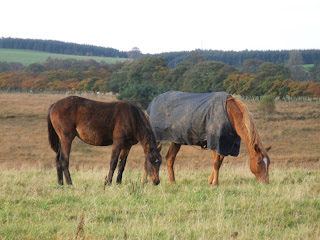 Well if the others are here to be a good example, Toby is definitely a stark warning, despite being over 17.2 and bred as a staying National Hunt horse he was in training in Newmarket as a two year old.  Somewhere on the gallops he lost his mind and he is clearly a sandwich short of the full picnic.  A tough sound horse who is an amazingly good doer but he is acquiring some very odd lumps around him.  After leaving him in a cheap rug for the last two winters as I thought the lumps would do him in I am now about to buy him an all singing all dancing heavyweight combo at great expense... now that's guaranteed to be the kiss of death! 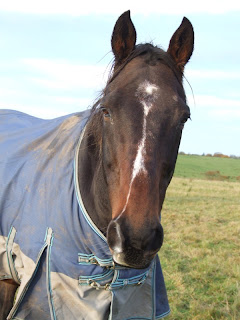 Liz I adore, the last two seasons she has got in foal and reabsorbed (though obviously I am waiting on a miracle "surprise" foal in March!!) so she's made her point and won't be covered again.  Liz is sponsored by my mum and as a result is modeling the latest regal purple heavyweight rug for geriatric horses. 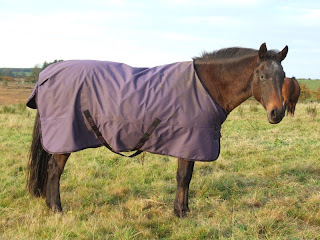 Ned on the other hand is wearing last season's reduced in the sale "dear god that's bright" rug, he wants to know why cheap rugs are ALWAYS shocking pink? 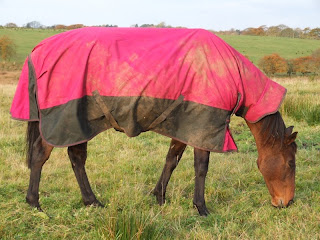 Erica is waiting for her new rug to arrive in the post, in foal to Arrayan and due the very end of March.  She is massive already and laughs in the face of the athletic, slim figure she once had. 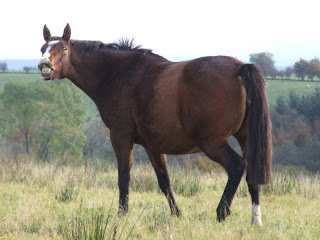 Hector, the big man of the back paddock, a complete gentleman who's only fault these days is that he sleeps so soundly that I give us both heart attacks once a week or so by poking him firmly while he's snoozing. 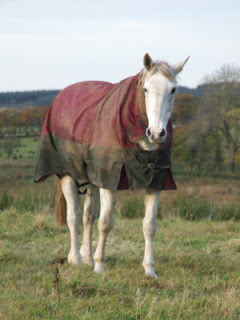 Love that you keep the old horses and that they have a job - that's a great way to teach the young ones calmness and also manners as they get to be yearlings. Thanks for the pictures and stories!

Loved your post. We hear of so many horse owners/keepers in this economy that can not afford to take good care of their animals, let alone their geriatric animals. It does my heart good to hear that loving care seems to be a priority with your herd.
I enjoyed the short bios on each animal, and as I read them, I had the feeling that you could write volumes about each animal. I'm looking forward to hearing more about the back field! Once again, it was a very kind post. Thanks for sharing!

One of my Fav posts so far!! More photos and stories please! And I have to see this cow print rug you were talking about on FB! We need Modeling shots!